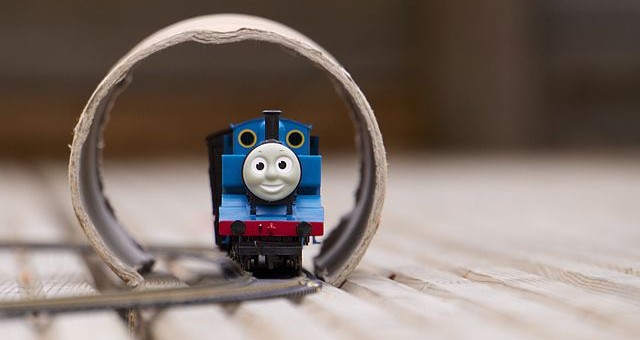 It has been thirty years since Thomas and his friends first rolled onto our screens. The cheerful blue engine has captivated audiences (both kids and their parents) with his various escapades for such a long time it’s perhaps not surprising that when we refer to Thomas toys and games, there’s no doubt as to who’s being discussed. As it’s the anniversary of the TV show, we thought we’d look into how Thomas came about.

The Reverend Wilbert Awdry created Thomas in The Railway Series of books in the 1940s. Not initially the main character, Thomas appeared in the second book to be produced and was said to be based on a wooden toy engine owned by Awdry’s son Christopher. As a selection of stories sprang up around Thomas and fellow locomotives Edward, James, Percy and Toby (to name but a few!), Awdry’s wife encouraged him to seek publication so that other children could enjoy the tales. Soon after, the first of beautifully illustrated Railway Series books were released.

Fast a favourite with both boys and girls, most found there was at least one of the colourful characters that they could identify with. The popularity of Thomas continued to grow and in the early 1980s, Christopher Awdry took on continuing the series, writing a number of new stories in time for the release of the TV show.

First aired on the 4th of September 1984 on ITV, the series Thomas the Tank Engine & Friends was adapted from the books by producer Britt Allcroft. The beautiful models and characterful animation used captivated parents and kids alike and the series has been running ever since. Originally narrated by none other than Ringo Starr, internationally famous for being one of The Beatles, there have been 18 series to date starring a variety of talented voice actors. As well known in the US as at home in Britain, the loveable engine has entertained, amused and even educated countless children.