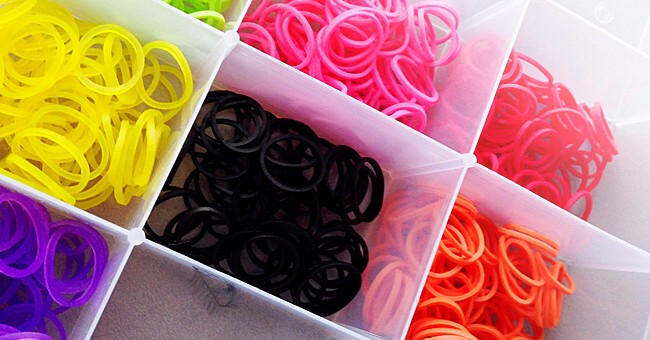 It’s the craze taking kids (and adults!) by storm; loom bands are one of the must-have items this summer, and thanks to our increasingly global community this is not just the case in the UK but all over the world. The web is chock-a-block with “how to” videos and images of colourful creations. There are offers on the bands themselves and many people are selling pre-made jewellery, charms and clothing. But just what are loom bands?

Maybe it’s not surprising that a craft so popular with children was actually inspired by their creativity. In 2011, Cheong Choon Ng, a Malaysian born ex-seatbelt designer from Michigan in the US, noticed that his daughters enjoyed making themselves bracelets out of elastic bands. In order to help make their creations quicker and easier, he created a loom for elastic bands. Seeing the diversity of creations this allowed, he soon developed a version made from plastic to sell – the Rainbow Loom – along with small and brightly coloured mini bands, or loom bands. As news spread about the adaptable and affordable new toys, shops everywhere began stocking them and promptly selling out. Loom bands spread from the US to countries all over the world and have since created a new craze here in the UK.

Playground crazes have been going on for decades – think yoyos, pogs and tamagotchis – but it has been some time since such affordable and diverse toys have really hit the big time. The interesting thing is that loom bands have not just inspired kids to get creative; adults are equally taken with ‘looming’. Celebrities including the Duchess of Cambridge, David Beckham and Harry Styles have all worn loom band jewellery and expert loomers have been selling pre-made items including dresses and even bikinis for grownups.

Despite their success – the top thirty bestselling toys for children aged over two years on Amazon UK are all loom related – loom bands are coming under fire. They have been banned in numerous schools around the world for distracting children in class, leading to bullying and for being dangerous if swallowed or left wrapped around fingers. Lovers of the environment and of animals have also raised concerns about the sheer quantity of bands which are not biodegradable produced; it is also feared they could injure pets or wildlife if consumed.

The latest mega-trend, the Rainbow Loom and loom bands are a brilliant toy; relatively cheap to buy, they inspire creativity and get kids (and grownups) off computer games for a while. As long as parents and children are careful in the handling and disposal of these items, they will continue to bring joy for some time to come.