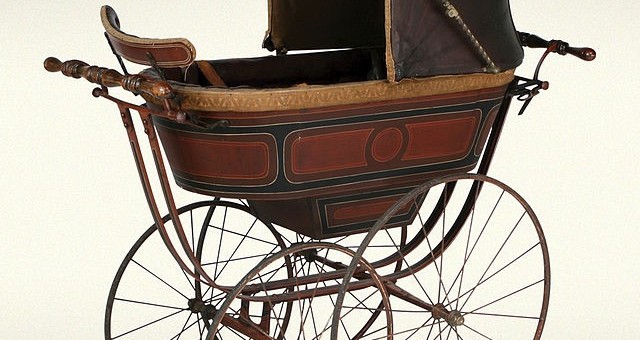 Prams and pushchairs are considered must-buys for those with a baby. Often one of the most carefully selected baby products, prams are now quite high-tech and some are more desirable than others when it comes to specification and appearance. All prams sold in the UK must conform to appropriate EU and British safety regulations (which will be demonstrated by the appropriate labelling confirming compliance with BS EN 1888:2003), but buyers should always be certain to purchase from a reputable retailer. As we sell a wide variety of prams and pushchairs, we thought we’d look into the history of these now ubiquitous items.

For many hundreds of years, babies were primarily carried. Mothers and fathers carried them in specially designed slings on their front or back. Many of these designs allowed the parent to continue to work with both hands whilst keeping their infant close – essential for those who must work and care for their child. Sling type carriers are in fact still used in many places, including in the UK, although less frequently than prams and pushchairs, which are pretty much ideally suited to traversing tarmacked streets and shopping centres whilst providing little ones with shelter from the wind, rain and sun.

The first wheeled baby carriage is said to have been invented in the 1730s. The design, something of a cross between a carriage and a basket, was built for the Duke of Devonshire by architect William Kent. Unlike modern versions, Kent’s was designed to be pulled by a goat, pony or even large dog – kids might love it, but modern parents would probably be more than a bit anxious about the basket’s precious cargo! From this time onwards, several wheeled baby and child carriers were used, but they really only came into their own in the Victorian era as an increase in the size of cities, towns, suburbs – and the number of made roads – saw them become a practical and fashionable option, known as perambulators or ‘prams’ for short.

In the late 1880s, prams were revolutionised by the designs of William Richardson, who worked on the hitherto inflexible designs to create a model which allowed parents to choose whether to have a youngster face towards them or away and which had independently movable wheels for increased manoeuvrability. Further moves to make prams more user friendly followed, with the emergence of new materials and technologies allowing for lighter weight, collapsible, yet sturdy designs. As the Twentieth Century progressed, so too did designs, with detachable carry cot prams and adjustable designs becoming popular.

Despite the pram’s long history, today pushchairs and buggy versions are more popular than traditional options due to their longer lifespan (they can often accommodate youngsters for up to a couple of years of age) and cheaper sale price.

Today’s options look positively futuristic compared to more primitive models; as technologies continue to evolve, who knows what’ll be next for baby travel.