It is fairly common for babies and young children to experience nightmares and night terrors; they do grow out of this and they don’t have any lasting damage, but it can be a stressful time. Night terrors differ from nightmares and there isn’t much information about when they begin. Babies tend to wake a lot through the night, usually as they require attention for changing or feeding generally. However, when there seems to be no specific reason for the commotion it often leaves parents wondering, can babies have nightmares? The answer to this is difficult as nobody can really know when children begin to have nightmares; it is thought to be around the age of 2-4 but can vary.

It is not fully known whether young babies have nightmares, but generally it is believed that nightmares begin around the ages of 2 and 4. Many parents believe their babies are having nightmares if they are unsettled during the night however, generally there will be another reason for this.

Night terrors can begin as early as 18 months, so if your baby is a little older, they may begin to develop night terrors. Night terrors differ from nightmares and happen during the deep sleep phase; your baby won’t remember them in the morning. 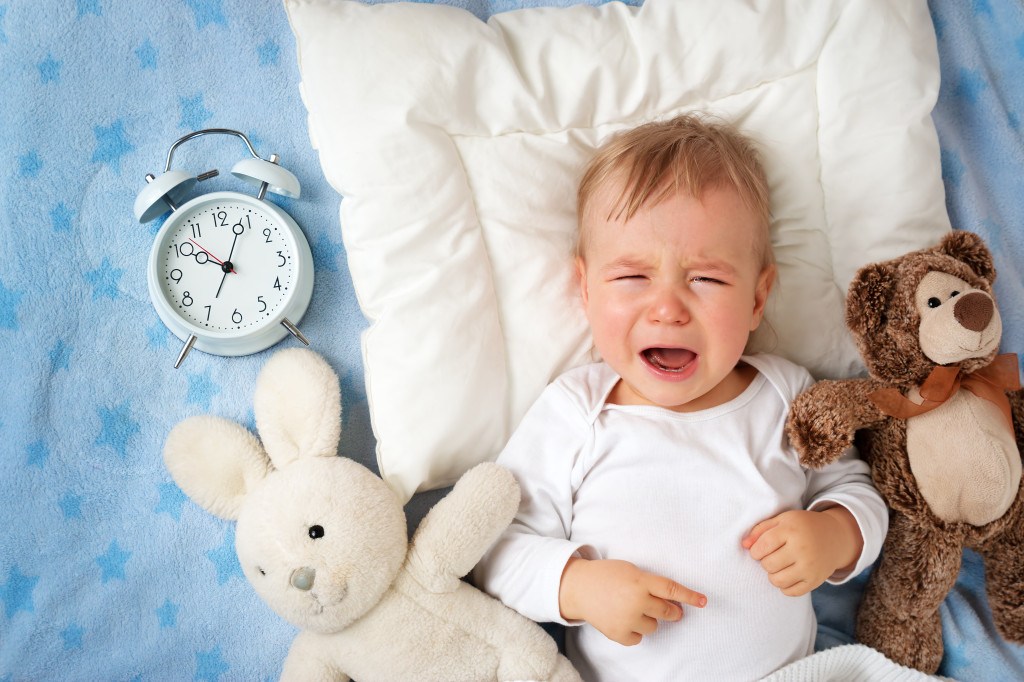 Nightmares are fairly common in children aged between 3 and 6. They tend to occur later in the night and can be extremely distressing; generally, children may wake up and be able to remember as well as describe the dream. Nightmares can be cause by a frightening experience such as a film and something worrying in waking life. As nightmares are generally brought on by worries or stress in waking life, it is important to talk through them.

What are Night Terrors?

Night terrors are more common if they run in the family, or if sleepwalking runs in the family. Night terrors occur during deep sleep periods and therefore they can be triggered during an increase in the amount of deep sleep your child is having; for example, if they have been extremely tired, ill or on medication.

Night terrors can be difficult to witness but they don’t harm your child; just make sure they are safe but don’t interact with them. You should not attempt to wake a child that is experiencing night terrors as it could make the episode worse. Your child won’t remember the episode the next day but you should still talk it through to see if they have any stresses or worries.

Dealing with Nightmares and Night Terrors

The best way to deal with both nightmares and night terrors is to ensure your child has a relaxing bedtime routine, so that they aren’t stressed when they go to sleep. It is also important to talk to your child and ensure they aren’t worrying or stressed about anything in their waking life, as this can be a big trigger for nightmares.

For night terrors there might be a pattern in which they occur. If this is the case, you can try waking your child 15 minutes before the episode usually occurs; this can help break the cycle if you do it for a week. Generally, children grow out of both nightmares and night terrors but if you are concerned you can speak to your doctor as their may be an underlying issue which can be addressed.

Doing our bit for the planet is Pure Joie

At Joie, we’re the best of both worlds – smiles and sunshine but serious about supporting others too. That’s why our core philosophy is to serve your family, our community, and our...

END_OF_DOCUMENT_TOKEN_TO_BE_REPLACED

Why You Should Take a First Aid Course

Children are notoriously prone to bumps, bruises and scrapes- and as a parent, it’s always handy to know how to deal with any injuries that might arise. Here are just a few great reasons...

END_OF_DOCUMENT_TOKEN_TO_BE_REPLACED

The first chapter in your cherub’s life draws to a close with months 10-12. Here are some of the exciting things you can expect as your baby approaches the age of one!

END_OF_DOCUMENT_TOKEN_TO_BE_REPLACED

How To Prepare For Your First Holiday With Baby

Your little angel’s first holiday is such an exciting time, filled with fun and new experiences. However, planning baby friendly holidays is not the easiest task. It can be tricky to figure...

END_OF_DOCUMENT_TOKEN_TO_BE_REPLACED

Tips for Eating Out with Toddlers

Going out for dinner is no doubt a treat - but with a toddler in tow, things can get a bit tricky. Don’t worry, with the right plan in place, eating out...

END_OF_DOCUMENT_TOKEN_TO_BE_REPLACED

Everything you Need to Know About Your Baby’s Weight

As a new parent, it’s completely natural to have a lot of questions when finding out just how many pounds and ounces make up your little bundle of joy. Weight is an...

END_OF_DOCUMENT_TOKEN_TO_BE_REPLACED

What are the Early Signs of Labour?

Pregnancy can feel like it lasts a lifetime – a never-ending combination of aches, sickness and general discomfort. But, before you know it, your due date arrives and with it, the labour,...

END_OF_DOCUMENT_TOKEN_TO_BE_REPLACED

The Best Christmas Gifts for a 1 Year Old

Your little festive elf’s first Christmas will be one of the most exciting and memorable times as a parent. However, the fun really begins once your munchkin reaches the tender age of one, becoming more active, and probably...

END_OF_DOCUMENT_TOKEN_TO_BE_REPLACED

Packing Your Hospital Bag: Which Home Comforts Should You Take?

Many expectant parents will pack their hospital bag a couple of months ahead of the due date – around 32 to 35 weeks. Preparation is key so that you can have everything ticked off your list and save yourself the stress later...

END_OF_DOCUMENT_TOKEN_TO_BE_REPLACED

Your little one’s first Christmas will be one of the most memorable times to date. Whilst they’ll be too young to understand the celebration, having a teeny cutie smiling away, along with your baby’s first Christmas stocking filled with presents, makes the day more magical than usual. Not...

END_OF_DOCUMENT_TOKEN_TO_BE_REPLACED

Everything you Need to Know About Planning for a Winter Baby

Winter is a magical time, from snowmen and sparkly lights to hot chocolate and cute onesies – what’s not to love? That being said, the thought of going into labour when it’s chilly and snowy can be daunting for parents expecting a...

END_OF_DOCUMENT_TOKEN_TO_BE_REPLACED

One of the best things about being a mummy-to-be is being showered with gifts by your loved ones. However, what to do at a baby shower is probably the number one question on the mind....