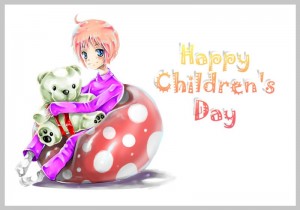 There are 3 separate dates set aside for Children’s Day worldwide in November;

So what is Children’s Day?

For those of you who maybe haven’t heard of the day before, it is a day set aside to honour children on a global level, first proclaimed in 1925 by the World Conference of the well-being of children and established universally in 1954. Different countries have different dates on an annual basis, but Universal Children’s Day, this year on November 20th, was recommended by the UN and is seen as the major global variant to other dates set aside around the world. Children’s Day has 2 aims – honouring children, but also to bring awareness across the world to children who have been exploited, abused and discriminated against.

So how is Children’s Day celebrated? That depends on the country and local traditions; for example, in Brazil and Chile, parents give their children gifts, whereas in Egypt it is seen more of a festival day, with fun and games across the country.  In South Africa, celebrating Nov 1st this year and always on the first Saturday in November, the day holds a more sombre meaning due to the issues faced by the children in the country, including poverty, abuse and various illnesses. This year, the Minister for the Dept of Women, Children and those with Disabilities will visit a child-led project at the Ugu Sports and Leisure Centre, Ugu Municipality, KwaZulu- Natal to host an interactive dialogue on violence against children, to raise awareness.

Marking the Occasion in India
Children’s Day is always celebrated on Nov 14 in India, as this is the birthday of Jawaharlal Nehru, India’s first Prime Minister, who was in power from 1889-1964 and was well known for placing particular emphasis on giving love and affection to children across the country. He saw them as India’s bright future.
To mark the importance of the date, many schools hold celebratory events, including cultural performances, film festivals and competitions, as well as both State and Central Government involvement.

Canada
Celebrated since 1993, it is seen as a date to raise awareness for the protection and basic human rights for children and young adults, and marks the date when Canada adopted the UNCRC.

Egypt
As above, it is seen more of a festival day in Egypt, with games and fun activities for children across the country, although it must be noted that many children are still in need of assistance.

Finland
Known as the Day of Children’s Rights, each year is marked with a different theme. This year will be the rights of disabled children and an action plan is available online detailing the plans from the Office of the Ombudsman.

Ireland
The Irish believe on this day that all should take pride in their child’s/children’s development and successes, on the basis that the children are the future and will lead the way for future country growth.

Israel
Classes and seminars are typically held throughout the day to mark Children’s Day in Israel, typically focusing around topics such as youth marriages.

Trinidad and Tobago
Children’s Day follows immediately after International Men’s Day (19th Nov) each year, which allows 2 consecutive days celebrating their menfolk and children. Festivals, fun and games are all part of the celebrations.