Making crafts is a great way to occupy children through the holidays and Easter is a great excuse to get creative! These simple craft ideas are great to create some cute Easter items: 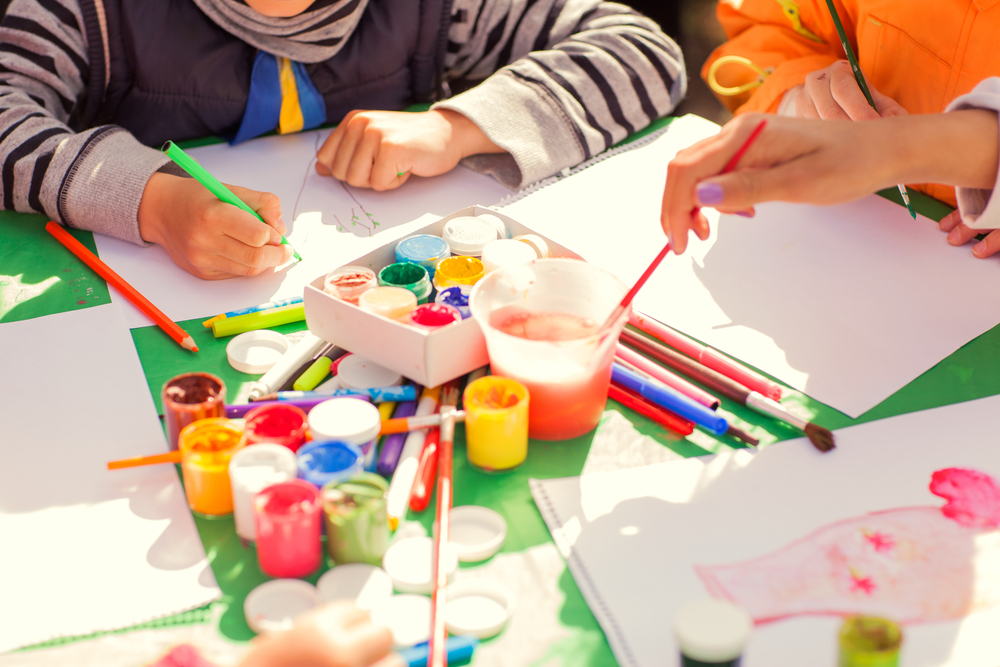 Start by removing the metal spring from the clothespin and gluing the two sides together. Once the glue is fully dry paint the entire clothes pin with white paint.

Once the paint is dry, use pink market to draw on the ears and rosy cheeks. You can add a thin layer of glue before using the black gel pen to make sure it doesn’t run, but it’s not necessary. Then use the gel pen to draw the bunny features (eyes, whiskers, paws etc).

Next tie the twine in a bow around the bunny’s ‘neck’ – there are small grooves in the peg which should allow for this. Use the glue to fix a small bead onto the bunny’s nose and you’re done!

Now you have cute little Easter bunnies to play with!

Start by choosing two cupcake liners, you can use different colours for the two sizes. Then flatten them out a little. Fold the liners in half 4 times (to create 8 petals). Using scissors, cut a curve into the edge of the cupcake liner low enough so the petals are distinct.

Stick the two cupcake liners together with the smallest at the front using double sided tape. Arrange them so the petals are facing forward and place the jewel in the centre.

Now you have some pretty spring flowers to brighten up your day!

To make the pom pom begin wrapping the yarn around three fingers, you need a nice thick amount as this makes them fluffier! Once you have enough yarn, slip it off your fingers and tie a knot around the centre to hold the loops in place. Using a pair of scissors cut through the loops at either end of the tie. Now you have a pom pom! It may look wonky so trim the edges with scissors until it more closely resembles a pom pom.

Now it’s time for the glue so make sure there is an adult around to perform this task! Glue two googly eyes onto the pom pom. Using the felt, cut a ‘bunny ear’ shape to use as feet and glue these to the underneath of the pom pom. Cut a small triangle from the felt and glue on as the beak.

There you go! Now you have cute fluffy Easter chicks!

Tips for Eating Out with Toddlers

Going out for dinner is no doubt a treat - but with a toddler in tow, things can get a bit tricky. Don’t worry, with the right plan in place, eating out...

END_OF_DOCUMENT_TOKEN_TO_BE_REPLACED

There’s budding blossom on the trees, birds-a-tweeting, and that heavy winter coat has been swapped out for a light jacket- it’s official, spring time is here! At Kiddies Kingdom, we know parents...

END_OF_DOCUMENT_TOKEN_TO_BE_REPLACED

Tis the season of paper, glitter and glue! This is the best time to put DIY Christmas crafts skills to the test with little ones. And it’s a fantastic way of killing two festive birds with one stone! Not only does it...

END_OF_DOCUMENT_TOKEN_TO_BE_REPLACED

Activities for Children in January

After all the excitement and enjoyment of Christmas comes to an end – January can feel a little dull and underwhelming. It’s just not the same for little ones as running around in Santa onesies, feasting on yummy pigs in...

END_OF_DOCUMENT_TOKEN_TO_BE_REPLACED

Must Haves for a Calm Christmas

Christmas - a time for giving and chaos! With so much to wrap, prepare and decorate, Christmas is generally an incredibly hectic time, as we rush around trying to make it a very merry...

END_OF_DOCUMENT_TOKEN_TO_BE_REPLACED

Boo – Halloween is on its way! The holiday is a great day for little ones to use their imaginations and get creative. However, whilst some children love the concept of Halloween, for others it can be...

END_OF_DOCUMENT_TOKEN_TO_BE_REPLACED

Planning the Perfect Christmas Day with a Newborn

Your little one’s first year is filled with tons of milestones, and Christmas is no exception! Their first Christmas will be a magical experience for the whole family, to cherish for years to come....

END_OF_DOCUMENT_TOKEN_TO_BE_REPLACED

There is a lot to remember when it comes to child car seat regulations, it can be overwhelming. It is worth knowing and understanding the rules, as if you don’t seat them correctly you...

END_OF_DOCUMENT_TOKEN_TO_BE_REPLACED

What to do on Mother’s Day

With Mother’s Day on it’s way, it’s probably about time to start thinking about how you would like to spend the day! If you’re a bit stuck on what to do this year, we’ve come up with...

END_OF_DOCUMENT_TOKEN_TO_BE_REPLACED

How to Clean a Pushchair

With the warmer weather gradually getting nearer it’s nice to have a spruce up of the things we use on a regular basis, such as your pushchair. Keeping these clean can seem like a...

END_OF_DOCUMENT_TOKEN_TO_BE_REPLACED

How to clean a baby car seat

We’ve all been there, 2 hours into a 5-hour car journey and your little one decides now is the perfect time for a nappy explosion! Mid-journey, there is time for a quick wipe-down, but...

END_OF_DOCUMENT_TOKEN_TO_BE_REPLACED

The world of car seat groups is a complicated one, with a huge range of different types of car seats available, suitable for different ages and weights of children. Trying to get your head...