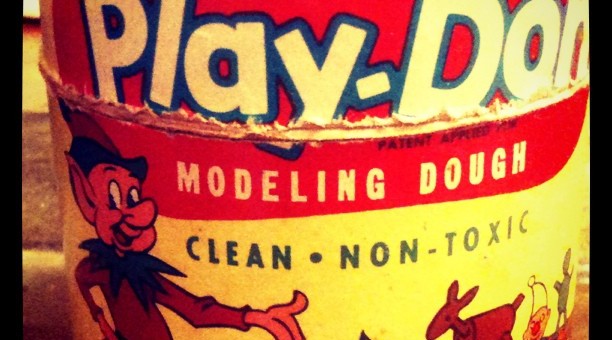 A childhood staple, Play-Doh has been encouraging creativity in kids for almost sixty years. Today, it is hard to believe that a product included in the Toy Industry Association’s ‘Century of Toys’ list did not start out as a toy at all – in fact, the whole history of Play-Doh makes for fascinating reading…

In the 1930s, a soap company called Kutol based in Cincinnati, U.S.A. launched a new product. A stiff, white, dough-like substance, Kutol Wall Cleaner was designed to help home owners remove soot and dust from wallpaper unsuitable for any sort of water based cleaning. Their cleaner was successful for two decades before changes in home décor (combined with improved wallpaper and reduced indoor soot!) led to a decrease in sales. Uncertain of how to salvage their floundering business, Kutol’s owners realised they needed to alter direction. Amazingly, the inspiration for the history-making change they made actually came from their target market – they learned from family members that children already enjoyed making models out of their wallpaper dough. Seeing the possibilities, the formula for Wall Cleaner was quickly changed. With detergents removed, salt reduced and a range of vivid colours added, the Play-Doh we know and love was born.

Introduced to the market at educational conventions by the newly formed Rainbow Crafts Company, Play-Doh was soon being stocked by department stores and advertised on popular kids TV shows including Captain Kangaroo and Romper Room. As sizes of containers on sale and packaging became more child friendly, sales boomed to almost $3,000,000 in 1958. By 1965, Rainbow Crafts had been purchased by General Mills and in 1987 by Tonka. In 1991 it was sold to Hasbro, the current owners of the product.

Over the years, Play-Doh began to achieve global fame and had several packaging face-lifts. The original ‘Play-Doh Pete’ mascot also changed considerably before being discontinued to make way for the simplistic but colourful labelling we all recognise now. Since the first accessory – the 1960 ‘Fun Factory’, numerous other innovative kits, moulds and associated products have been made available. Today, more than 95 million tubs of Play-Doh are sold every year in 75 countries. A timeless toy, this modelling putty is a reminder that simple ‘props’ combined with a child’s creativity often make for the best play times.